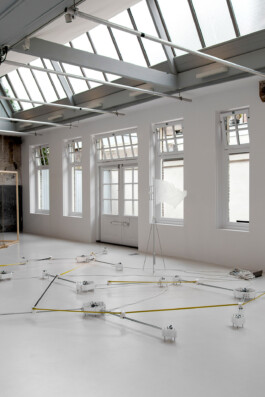 The Aerographer maps the air to establish a subtle territory of uncertainty. The kinetic installation measures the airflow at different locations, and translates their differences to the mechanical motion of an array of nodes. The nodes travel on different axis shifting connected lines, thus unfolding a networked topography of the air in constant adaptation and change. The installation explores the chaotic behavior of the air for unfolding an unstable tangible map of a fictitious territory, and deals spatially with the uncertainty that arises from a space of constantly shifting boundaries that react with the air.

The work explores the spatial anxieties of perceiving differences and establishing relative boundaries in times of ubiquitous technological mediation and accentuated societal uncertainties. It addresses the question: what is it like to live in airlike times, when everything is transparent, and no ground lingers? By intertwining a narrative of a system seeking to sustain a place inside of the clouds, the project speculates how the contemporary digital utopias of network and information may be shifting towards the turbulent tensions between materiality and boundaries, orientation and borders, place-making and transparency. 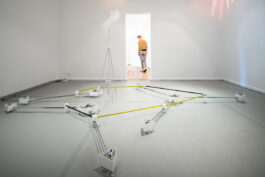 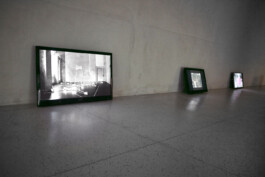 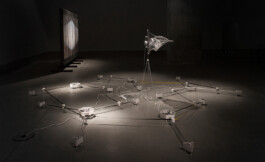